Shopping Cart
Your Cart is Empty
Quantity:
Subtotal
Taxes
Shipping
Total
There was an error with PayPalClick here to try again

Thank you for your business!You should be receiving an order confirmation from Paypal shortly.Exit Shopping Cart

It is winter, all of the sudden its wet and grey and the garden is sodden. After a summer of drought and warmth it takes a bit to adjust, but then I rejoice in the fact that my rainwater barrels are full and that I do not have to provide fresh water for the chickens, it is everywhere.
While I was spreading some more seaweed on citrus and brassica, I noticed the leftover almonds on my tree and marveled at the fact that I now have fruit of this reluctant provider. While I picked them off, I remembered...
Years ago I got to know a very kind couple through Free Cycle, the website where we can post our surplus, for someone else to use. As they went through their eqc repairs, there were quite some leftovers which I could use for my outbuildings. One day they posted a tree and I was curious to see if that would be something I could transport and nourish. They had tried to get this almond tree to fruit, but so far it had only given one almond and it was overshadowed by other plants. It was a bit of a job but the tree became part of my landscape and stands proudly in full sun in view of the house and the studio.
Year after year I gave it great care, manure, mulch and good watering and expected at least one other almond, but no such luck. It would blossom pretty dark pink flowers and produce one almond.
After about 4 years I also noticed gum oozing out of the bark and decided that this almond was obviously not happy and that I would have to remove it with pain in my heart, but I do not have space for an almond which just flowers.
Last spring I was away for a few weeks and on return spotted a difference in the contours of the almond tree. On inspection I found it full of almonds. Small ones at one side, large ones at the other. So surprised I was, I just stared. And even though there is still a problem with a disease, which I have not managed to relieve yet, the tree has produced a beautiful crop of soft skin and hard skin almonds.
All autumn I have picked some while passing the tree, the delicious fresh almond taste treasured. And now the last ones were picked and shelled in front of the fire. Some will be used for almond milk, some will be part of my favorite desert of plain yogurt, black current juice preserved with coconut sugar, vegan chocolate or carob drops and soaked almonds . Wondrous gifts of nature.

Living in the Northern part of Europe when I was a child, we didn't grow up with a lemon tree in our garden like so many here do. I use that as an excuse for my inability to grow lemons. Here in the bay they should be easy to grow but I have already killed 4 and have recently purchased my fifth specimen and a different variety at that. I have kept it in a pot in a sheltered space, in the sun. W'll see... I fare better with lime, orange and mandarin, but my grapefruit which was such a prolific fruiter, recently turned its leaves yellow and then shriveled up. Such a shame. I thought I had done everything right with feeding, watering, epsom salts, neem pellets etc. But no, it didnt make any difference. May be I should have left it to fend for itself.

However one plant that seems to like it here is a relation. When I first planted it in a sunny spot, it did ok, but never just got the fruit right. They stayed tiny and as I expected them te become rounded, I was surprised that they never managed to close their segments. Year after year, the same tiny spikey yellow inedibles. Until one day in a cookbook I discovered the real reason this fruit was so different. It was not supposed to be round, it was supposed to have fingers, as it was called Buddha's Hand, a citrus delicacy mainly used in Asia and France as I understand it.

When I was visiting the Bay of Plenty in spring, guess what I found at the Farmers Market? Big Hands, small Hands, open Hands, closed Fists; Buddha's Hands galore. There was my proof, they really exist and as I proffered one to a famlly member, who duely used it grated in the Sunday Roast, I had my first taste of this unusual fruit. And liked its slightly more pronounced taste. A good foreboding.

Through circumstances I had to transplant my little tree and it ended up in a position that I thought was not so favourable. Right next to a nectarine, in a North corner, next to the fence, so not a lot of sun.  But here came a surpise again. It flourished and immediately produced a much larger fruit, a bright yellow open hand. The rest of the tree is in flower again, the leaves are green, it must like it there close to other fruit trees and with rhubarb at its feet.  Today I picked that first fruit. I can't really compare it to anything that grows in the Bay of Plenty, but I am so pleased to have my first Buddha's Hand in my hand.

Thinking of flavouring vodka with it, adding it to stuffing, spicing up the banana cake I was going to make. And investigating how to use its fragrance for clothes, wardrobes and drawers and hair and hands of course.

So if one day you get a whiff of a spicy citrus scent, some one close to you may have been blessed by Buddha's Hand. 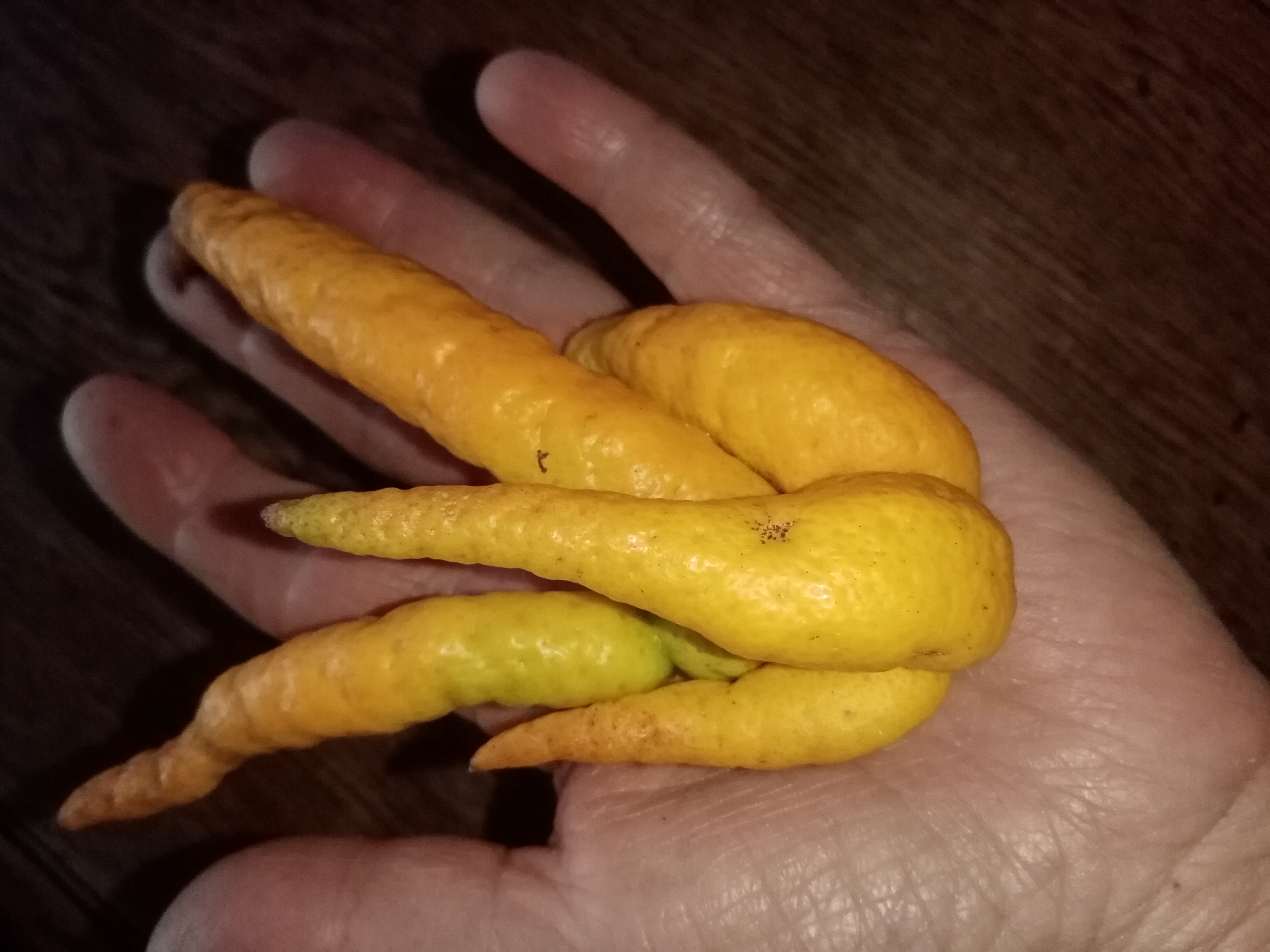